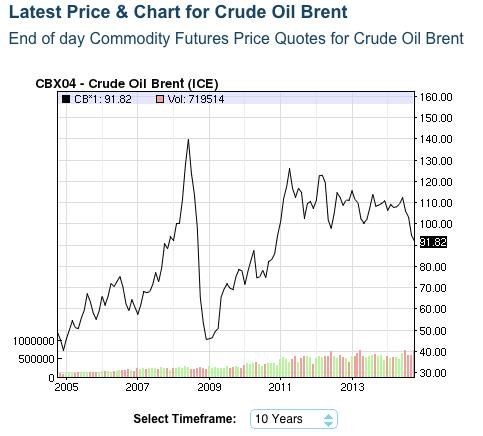 Shouldn’t gas prices be going up?

Iraq is one of the world’s largest oil producers, so when the ISIS militants rolled in from Syria and took over Iraq’s largest oil refinery, global oil traders and gas companies braced for a sharp spike in prices.  Consumers expected to see higher prices at the pump in short order.

Instead, oil and gasoline prices are lower than they were a year ago.  As you can see from the chart below, “regular” grade gasoline prices in different parts of the U.S. fell during the winter and have risen again in the summer months.  If you happen to live on the West Coast and suspected that you paid more for gas than the rest of the country, well, this chart confirms it; the prices in California and the West Coast generally are more than 50 cents a gallon higher than the cost at the pump along the Gulf Coast, where the U.S. has the bulk of its refineries.  People in the Northeast, Mid-Atlantic and Southern states generally fill up their tanks at cheaper prices. 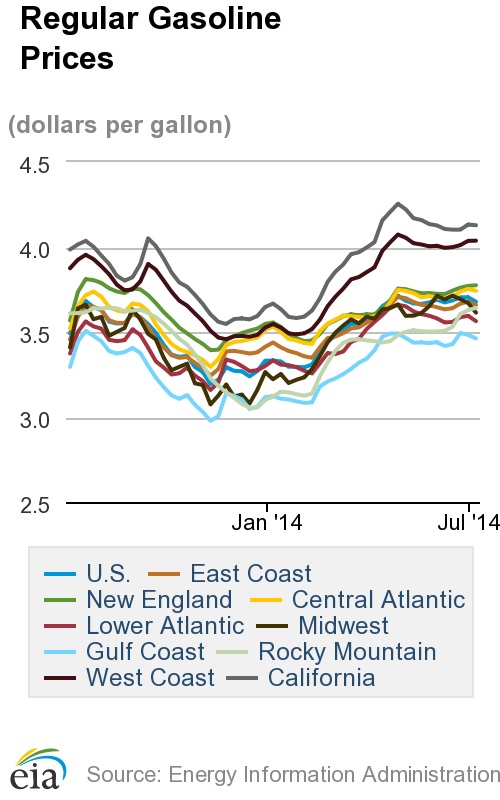 If you want a longer-term view, review charts that show the cost of “regular” grade gasoline since 1990.  They show prices hovering around a dollar a gallon for most of the 1990s. (The good old days!)  Since then, the price has gradually crept upwards, with greater volatility and a deep price drop during the Great Recession.  Since the beginning of this decade, prices have remained fairly level, and indeed today’s gasoline prices are almost exactly what they were in early 2008.

Prices have held steady despite the turmoil in the Middle East, in part because most of the Iraqi oil fields are located in the southern part of the country, a safe distance (so far) from the ISIS insurgency.   The other main oil fields are located in Kurdish-controlled areas in the northern part of the country, and the Kurds have managed to protect their ethnic border with great effectiveness.  Add to that a recent agreement in Libya between the central government and a regional militia that will add 150,000 barrels a day to that country’s crude oil exports.

The moderation in prices, from $4.00 at the pump two years ago to roughly less than $3.00 today, is acting as a kind of stealth stimulus for the U.S. economy.  U.S. drivers are expected to use roughly 133 billion gallons of gasoline this year, so the price break adds $53 billion of savings to peoples’ balance sheets.  This, added to the lower costs for factories, airlines and electric power plants, could add half a percentage point to U.S. economic growth in 2014.

If you have any questions or concerns about financial planning or investment management, please don’t hesitate to contact us or visit our website at http://www.ydfs.com. We are a fee-only fiduciary financial planning firm that always puts your interests first.