With about 10,000 baby boomers on average retiring every day, it’s not unusual for me to talk to clients and prospects who are anxious about the future of social security and medicare. Some clients, despite evidence and advice to the contrary, have gone ahead and filed for social security benefits even if it meant they would potentially reap hundreds of thousands of dollars less over their lifetimes, because they are worried that the systems are going “bankrupt”.

Given the stories and rumors that seem to float around endlessly about the imminent demise of social security and medicare, it is understandable that many were alarmed when, on June 5, the good people who run Medicare and Social Security released a report that said that the Medicare program will become insolvent in 2026 and Social Security will face a similar fate in 2034. The Medicare projection is three years earlier than the previous report, while the Social Security projection is unchanged from previous estimates.

These problems are not new, of course. People are living far longer than anticipated when Social Security was created in 1935; in fact, the average life expectancy for a person who managed to reach age 30 at that time was age 68 for men and 70 for women. Today it’s 79 for men and 82 for women. Meanwhile, Medicare has been hit with higher-than-inflation increased medical expenses—along with, of course, those longer lifespans.

Alarmists point out that the Social Security and Medicare Trust Fund reserves are “invested” in government securities, which is essentially the government writing itself an IOU—currently to the tune of $2.8 trillion, which is the total “asset reserves” in our largest social programs. Individuals are advised not to run their own finances this way, accumulating deficits but meticulously keeping slips of paper around which represent a promise to pay back every single nickel and dime eventually. But in fact, today nearly all of the money paid out to Social Security recipients, and on behalf of Medicare enrollees, are simply transfers of money paid into the program by current workers. The money comes in as FICA payments and taxes on Social Security benefits, and goes right back out the door to beneficiaries. We’ve all heard the expression that “our government is running the world’s largest Ponzi scheme”.

So where’s this alleged deficit? That can be found on page 9 of the report, in a section labeled “Assumptions About the Future.” There, the report makes economic projections about the next 75 years, including the future fertility rate (children per woman), mortality, the annual percentage change in worker productivity, average annual wage increases, inflation, unemployment and the interest rate earned by those IOUs the government is writing to itself. Page 18 shows a graph that illustrates the projected outcomes of three different sets of assumptions for all these (basically unknowable) variables, and one can see that two of them are, shall we say, not optimal, while the third projects not just solvency, but actual prosperity for the combined trust funds going forward well past the year 2090. 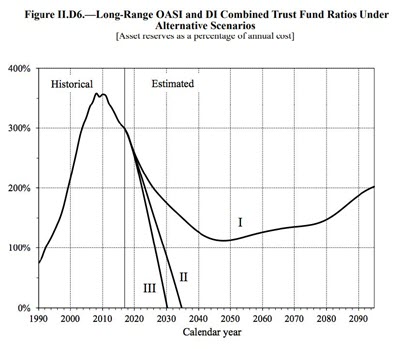 Even if the worst case comes to pass, and the programs goes “bust,” they won’t actually stop paying benefits. There will still be workers who pay in FICA taxes, and even if there is no trust fund, these collected payroll taxes can be transferred, as they are now, to Social Security and Medicare recipients. The Social Security trustees report, on page 58, how much of the projected payments would be covered by workers going out to 2090 under the three future scenarios. The worst case scenario says that there will be roughly an 18% shortfall in 2040, rising to roughly 22% by 2090. Basically, that means that Social Security recipients, worst case scenario, would have to get by on 82% of the benefits they were expecting in 2040, and 78% if they manage to live all the way out to 2090.

And, of course, that’s if nothing is done to shore up the program between now and then. One of the simplest options on the table is to raise the age people can collect full retirement benefits as the average lifespan goes up, basically “indexing” retirement benefits to changes in longevity. Congress could also marginally raise FICA taxes (e.g., the taxable wage limit) or impose more taxes on Social Security income. Minor tweaks to the system can add decades to the solvency of social security and medicare.

The best advice here is not to panic about the fate of our country’s social programs. There is no question we need to address their solvency, and with gridlock in Washington, that seems like a bit of a long shot. But even if Congress can’t agree on tweaks and fixes, the world won’t come to an end. Social Security and Medicare recipients will have to tighten their belts a bit—and maybe start voting for candidates who offer real solutions to the budget issues in Washington. But as I’ve told my clients for years, no one is going to vote for anyone who favors allowing the system to go bankrupt, or not pay the promised benefits. Members of congress really like keeping their jobs, and eventually they’ll find the right solutions.

Ever since I became a tax preparer in 1980, a federal deduction for state and local income, property or sales taxes have been available to taxpayers as an itemized deduction, generally without limitation. The idea behind the deduction, at least as it relates to state income taxes, is to grant taxpayers some degree of relief from double or triple taxation of the same income.

Of course, each year, thousands of professionals use their creativity and ingenuity to try to figure out the best ways to lower your federal taxes, including optimization of your state and local tax deduction. You know you’re living in interesting times when state lawmakers join that crowd.

The reason they’re working so hard is something popularly known as the SALT (State And Local Taxes) provisions of the new Tax Cuts + Jobs Act, which set a firm $10,000 limit on the deductibility of state and local taxes. That limit isn’t such a big deal for residents of Texas or Florida, and other states that don’t collect income taxes. But people living in New York, New Jersey, Connecticut and California generally pay far more than $10,000 of income taxes to the state alone, on top of the property and municipal taxes they’re assessed.

Those higher-tax states are now using that aforementioned creativity and ingenuity to help their citizens get back those deductions—and some of the proposed solutions are indeed quite creative. For instance, New York has already begun allowing taxpayers to, instead of paying their local property taxes, simply make a comparable charitable contribution to a charity set up by their local school district. Presto chango! What used to be a tax is now a charitable contribution that would be deductible for taxpayers who itemize (limited to a maximum of 50% of adjusted gross income). The state would also allow New York City and other municipalities to set up their own charitable trusts, converting local taxes into deductible charitable contributions as well.

Not to be outdone, New Jersey and Connecticut are attempting to reclassify state taxes as charitable contributions, while New York plans to allow taxpayers to convert their state income tax into a payroll tax, which their employers would pay on their behalf—and then deduct from their federal tax bill.

Even more creative: California’s Senate Bill 227 would create something called the “California Excellence Fund,” which would provide a credit against state income tax liability for any contributions to the fund—effectively recharacterizing as much of the state tax liability as the resident wants into deductible charitable donations. Similar legislation has been introduced in Illinois, Nebraska and Virginia. In Washington state, which doesn’t levy an income tax, a copycat bill would let taxpayers make charitable contributions to the state and receive a sales tax exemption certificate in return.

The most complicated solution is being proposed in Connecticut, whose legislature is finalizing a bill that would impose an “entity-level” tax on pass-through companies like Subchapter S corporations and LLCs—entities which normally are only taxed at the shareholder level. (Hence the name “pass-through.”) Those entity-level taxes would be deductible by the S corp. or LLC, and the state would issue an offsetting individual income tax credit to shareholders of the entity. Presto! The state income tax becomes deductible at the company level, and the individual’s state income tax obligation goes away. Connecticut’s Department of Revenue Services estimates that this provision would recover $600 million in otherwise-lost SALT deductions for state residents in the first year alone.

Is any of this legal? We don’t know yet. The IRS has recently issued a broad warning against states’ creative use of charitable contributions, and it never helps a future tax court case when lawmakers openly tout their intentions to evade the federal SALT provisions when they introduce state legislation. But tax experts note that the IRS has provided favorable rulings in more narrow cases regarding the federal deductibility of state tax credits in 33 states.

For instance, Alabama has, for years, provided a 100% state tax credit for taxpayers who donate money to organizations that give children vouchers to attend private school. New York’s new SALT-related provision would give an 85% state tax credit to residents who donate to a local charitable fund that supports education. Is one legit but the other not?