Who cares what games we choose?
Little to win, but nothin’ to lose”

— Song Lyrics from the 1967 hit single “Incense & Peppermints” written by Tim Gilbert & John S. Carter and performed by the group known as The Strawberry Alarm Clock

Suppose somebody came up to you and shouted: “I have terrible news about the economy. I think you should sell your stocks!”
Alarmed, you say: “Oh, my God. Tell me more!”
And this mysterious stranger shouts: “Run for the hills! The American economy just added 200,000 more jobs—more than expectations—and the U.S. jobless rate now stands at 4.1%, the lowest since 2000!”
You blink your eyes. So?
“There’s more,” you’re told. “The average hourly earnings of American workers have risen a more-than-expected 2.9% over a year earlier, the most since June of 2009! You should sell your stocks while you can!”

Chances are, you don’t find this alarmist stranger’s argument very persuasive, but then again, you don’t work on Wall Street. After hearing these benign government statistics, traders rushed for the exits from the opening bell to the closing on Friday, and at the end of the day the S&P 500 stocks are, in aggregate, worth 2.13% less than they were last Thursday. The NASDAQ Composite index fell 1.96% and the Dow Jones Industrial Average, a somewhat meaningless but well-known index, was down 2.54%.

To understand why, you need to follow some tortuous logic. According to the alarmist view, those extra 200,000 jobs might have pushed America one step closer to “maximum employment”—the very hard-to-define point where companies have trouble filling job openings, and therefore have to start offering higher wages. No, that’s not a terrible thing for most of us, but the idea is that if companies have to start paying more, then they’ll be able to put less in their pockets—and the rise in the hourly earnings of American workers totally confirmed the theory.

If you’re an alarmist, it gets worse. If American workers are getting paid more, then companies will start charging more for whatever they produce or do, which might raise the inflation rate. “Might” is the operative word here. There hasn’t been any sustained sign of higher inflation, which is still not as high as the Federal Reserve Board wants it to be. But if you’re a Wall Street trader who thinks the market is in a bubble phase, you aren’t necessarily looking at facts to confirm your beliefs.

Suppose you’re not an alarmist. Then you might notice that 18 states began the new year with higher minimum wages, which might have nudged up that hourly earnings figure that looked so alarming a second ago. And some companies have recently announced bonuses following the huge reduction in U.S. corporate tax rates, whose amortized amounts are also finding their way into wage statistics.

Meanwhile, those same government statistics are showing a resurgence in factory activity and a rebound in housing, which together, account for more than 50,000 of those new jobs.

So the question we all have to ask ourselves is: are we alarmists? Selling everything in anticipation of a bear market has never been a great strategy, even though stocks are admittedly still priced higher than they have been historically. Trimming some positions and perhaps putting on some hedges into one of the greatest bull runs of our time makes a lot of sense. But panicking never paid worthwhile benefits to anyone.

If you are not an alarmist, then you have something to celebrate. The S&P 500 has now officially ended its longest streak without a 3% drop in its history—as you can see from the below chart. It’s an historic run not likely to be seen by any of us again. The truth about the markets is that short, sharp pullbacks are inevitable and routine—unless you were living in the past year and a half, when we seemed to be immune from normal market behavior. 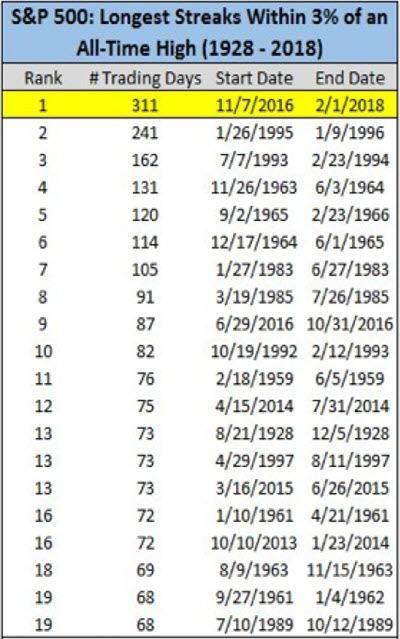 Although the drop on Friday was a bit “jarring”, and technical indicators point to some internal deterioration, I don’t believe that this is the start of a bear market. Employment, housing and the overall economic environment are way too strong to give way to a recession, at least not in the next six to nine months.

I’ve been saying for months now that the market is way past due for a normal correction, as evidenced by the above chart. A pullback of 10-15% in the markets would be normal and healthy, to allow this market to “rest up” for the next move higher. If you think you’re nimble enough to get out of the markets now, and know when to get back in to catch the next wave higher, then I and 90% of the masses out there can probably learn from you. But as the great fund legend Peter Lynch once said, “Far more money has been lost by investors preparing for corrections, or trying to anticipate corrections, than has been lost in corrections themselves.”

If you’re concerned about the markets and you would like to review your current investment portfolio or discuss any other financial planning matters, please don’t hesitate to contact us or visit our website at http://www.ydfs.com. We are a fee-only fiduciary financial planning firm that always puts your interests first. If you are not a client yet, an initial consultation is complimentary and there is never any pressure or hidden sales pitch. We start with a specific assessment of your personal situation. There is no rush and no cookie-cutter approach. Each client is different, and so is your financial plan and investment objectives.