Chances are, you’re celebrating today’s lower gas prices.  AAA reports that the national average price of gas is $2.48 today, the lowest since December 2009.  The result: an estimated $70 billion in direct savings for U.S. consumers over the next 12 months.  At previous prices, the average American was spending about $2,600 a year on gasoline, so the 20% price decline would result in $520 more to save or spend.

It gets better.  Even though gas prices (and, therefore, the cost of driving) have plummeted, the Internal Revenue Service is raising the standard mileage rates that people can deduct on their tax return for business travel, from 56 cents in 2014 to 57.5 cents per business mile driven next year.

Only the investment markets seem to think that cycling an extra $70 billion into the U.S. economy is a bad thing.  This past week, large cap stocks, represented by the S&P 500 index, saw their prices fall by 3.5%—their biggest drop since May 2012. Why?  The only possible explanation is that rapid Wall Street traders believe that lower oil prices will harm the economies of America’s trading partners, and therefore impact the U.S. economy indirectly.

So let’s take a closer look.  While U.S. consumers are cheering the decline in oil prices, and non-energy producing nations like Japan and countries in the Eurozone are seeing a boost in their economies, who’s NOT celebrating?

As it turns out, some of the biggest losers are American domestic shale oil producers, who basically break even when oil prices are at their current $50-$60 a barrel levels.  Any further drop in prices would slow down domestic energy production, and probably create a floor that would keep prices from falling much further.

Another big loser is the socialist government in Venezuela (remember Hugo Chavez?), which needs oil prices above $162 a barrel to pay for all of its social programs.  You can also sympathize with Iran, which reportedly needs oil prices to move up to $135 barrel to stay in the black, due to continuing sanctions from the world community over its nuclear program, and the high cost of supporting Hezbollah and its own military ventures in the Middle East.

The biggest loser is probably Russia, which requires oil prices of at least $100 a barrel for its budget to withstand international sanctions and finance its own military adventures against neighboring nations.  Economists are projecting that Russia will fall into a steep recession next year, when GDP could decline as much as 6%.  The nation is experiencing what economists call “capital outflows” of $125 billion a year—a fancy way of saying that wealthy Russians are taking money out of Russian banks and either investing abroad or putting their rubles in banks located in more stable foreign jurisdictions.  And in the process, they are exchanging their rubles for local currency, as a way to protect against the recent free-fall in Russia’s currency.  Bloomberg News recently published the below graphic which many Americans will find entertaining, but which is probably not happy news for Russian President Vladimir Putin. 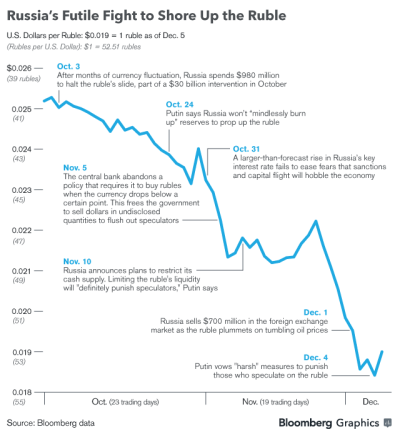 It’s interesting that the markets seem to be worrying about low oil prices when the economies with the most to lose are not only less than minor trading partners, but actual political enemies of U.S. interests. Cheaper oil will eventually be regarded as a plus for our economic—and political—interests, but the downturn suggests that Wall Street traders are hair-trigger ready to be spooked by anything they regard as unusual.

If you would like to discuss your current portfolio or any financial planning matters, please don’t hesitate to contact us or visit our website at http://www.ydfs.com. We are a fee-only fiduciary financial planning firm that always puts your interests first.  If you are not a client yet, an initial consultation is complimentary and there is never any pressure or hidden sales pitch.